Looking for Funding?    Listen Up.

There are a large number of successful, experienced entrepreneurs and business people who invest in innovative and start up ventures. They are referred to as “Angels” because they provide money and advice / mentoring.   This combination of capabilities is invaluable for entrepreneurs to succeed.    Additionally,  Angels can also provide entrepreneurs access to their network of business contacts.  This is important to provide sufficient funding to move the company forward,  accelerate product development, and build sales momentum.    As this is achieved,  the company is more appealing to a Venture Capitalist.   In 2004-05 VCs invested US $22.1 Billion in 3,008 deals that resulted in an average of US $7.4 Million.   Further,  Angels invested US $23.1 Billion in 49,500 companies for an average of US $470,000.    While the success rate of start ups is very low, Angels helped create 50,000 start ups of which 3,000 companies reached a stage where VC funding could be justified. 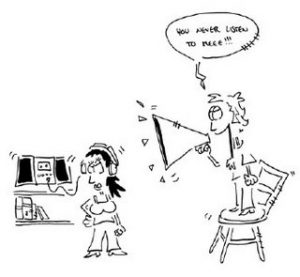 The discussion ranged from valuations, deal structures, pitching tips and more.  Steve and Kevin gave different examples of the do’s and don’t when approaching angels.  One of the more memorable points that Steve emphasized was to avoid answering the “What valuation are you looking for?” question.  Steve suggested it is better to gather competitive deals and see what valuation offers are proposed by the interested investors.  Kevin focuses on the consumer internet space, and his deal preference is to invest only if the startup has a live product.  Steve’s background is in the semiconductor space, so he and Kevin had a few differences in investment strategy.

The one universal point that Steve and Kevin agreed upon was in regards to whether a person or team is “fundable”. The deal breaker for both Steve and Kevin is an entrepreneur who does not listen. No matter the intelligence of the Founders or the early success of the startup, if the Founders and especially the CEO will not listen, these guys will NOT invest in the company. Steve and Kevin look to add value and provide advice to their portfolio companies. They invest more for the joy and excitement of the deal, and will not waste time on a team that does not value their input. There are passive Angels looking to put money into deals and let the team operate without getting involved. However, this passive investment approach or “dumb money”, while the exception in the Bay Area, is much more prevalent in many other areas. Dumb money causes a number of problems – valuation and governance issues, Founder unaccountability, slow learning organization, etc. In contrast, “smart money” accelerates venture growth, improves decision making, establishing organizational structure and discipline, preparing the company for the next phase (ie: VC funding, etc.), fast tracks Founder understanding of business, prudently managing risk, etc.).

For the venture to be successful, Founders need to achieve the milestones set out in the business plan and wear a lot of hats in the formative stages of the company to better ensure results occur. An outsider such as an experienced Angel can identify which hats do not fit well with the Founder. The Founder may already “know what they do not know” as Steve pointed out, which is good. However, since many Founders “do not know what they don’t know”. they inappropriately believe that they are equipped to wear all hats. When this is the case, because there isn’t a shared understanding of what is needed to move the venture forward, getting outside investment with this attitude will prove to be a challenge.

In summary, being a good listener and engaging with experienced business people are important factors to getting funded and improving the probability of venture success. In contrast, since the inability to listen and learn from the lessons of others needlessly increase risk in an already risky business, this will create a major barrier to a startup’s fundability.