With meaningful Innovation and launching a new product hard to do, the following are examples of great plans that didn’t work out. This includes major corporations having flops – since less than 3 % of new consumer packaged goods exceed first-year sales of $50 million.

While some may find these failures amusing or take joy in the misfortunes of others, the much more important take away is the associated organizations are still here – and continue to have a major presence in their markets. This reflects how these enterprises got better at taking calculated risks and in managing change – by learning from their experiences. Along with this there was a greater appreciation of the need to be have better look ahead and innovation skills as well as how to apply metrics, the importance of execution and agility to achieve the desired objectives, and the need for an entrepreneurial, technology and results oriented culture. These are critically important for the organization to increase relevance and revenue going forward.

So if you think your organization has challenges with failure, should any of the following epic events have occurred in your business – what would have happened ?

If not extinction, there would be a much greater awareness of the need to effect change – to be much better at innovating for impact – to realize success.

From this perspective, to win in our on-line, real-time, all-the-time world , hopefully we all learn valuable lessons from the following epic failures – 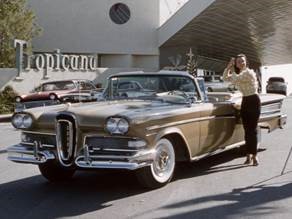 Bill Gates cites the Edsel flop as his favorite case study. Even the name “Edsel” is synonymous with “marketing failure.” Ford invested $400 million into the car, which it introduced in 1957. But Americans literally weren’t buying it, because they wanted “smaller, more economic vehicles,”

Other pundits have blamed its failure on Ford Motors execs never really defining the model’s niche in the car market. The pricing and market aim of most Edsel models was somewhere between the highest-end Ford and the lowest-end Mercury. It was taken off the market in 1960. 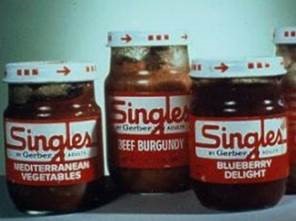 Gerber innovated baby food for adults in 1974, with flavors like beef burgundy, Mediterranean vegetables, and blueberry delight. Gerber Singles, for when you are an adult who can no longer be bothered with feeding yourself. 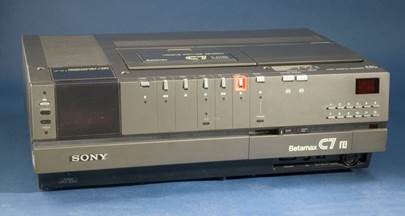 The 1970s saw a war in home video formats between Betamax and VHS. Sony made a mistake: It started selling the Betamax in 1975, while its rivals started releasing VHS machines. Sony kept Betamax proprietary, meaning it had exclusive rights to the format; consequently, the market for VHS products quickly outpaced the company. 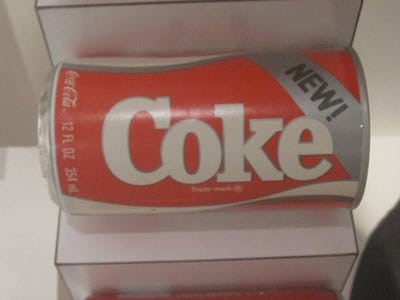 In the early 1980s, Coke was losing ground to Pepsi. So it tried to create a product that would taste more like Pepsi. While New Coke fared OK in nationwide taste tests before launching in 1985, it turned out those were misleading. Coke abandoned the product after a few weeks and went back to its old formula. It also gave its product a new name: Coca-Cola Classic.

In 1989, Pepsi tried to target the “breakfast cola drinker” with Pepsi A.M. At the time of its release, The New York Times reported that Pepsi A.M. would have 28% more caffeine per ounce than regular Pepsi. It lasted only a year. 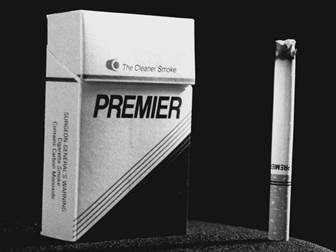 In the 1980s, just as anti-smoking campaigns were heating up, RJ Reynolds put over $300 million into a new product: “Premier,” smokeless cigarettes. According to the Los Angeles Times, the Premier cigarettes heated up tobacco but did not burn it, and consumers did not like their scent or taste. RJ Reynolds pulled the cigarettes after just five months of testing in a handful of cities. 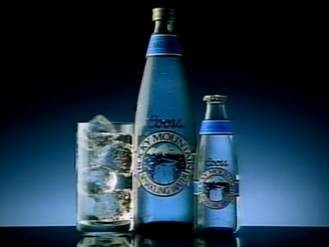 This was an interesting experiment in brand extension. Coors Rocky Mountain Spring Water launched in 1990 and didn’t fare well. It turns out beer drinkers want only one thing from their favorite label: beer. 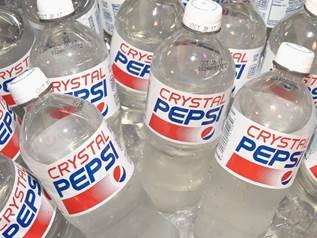 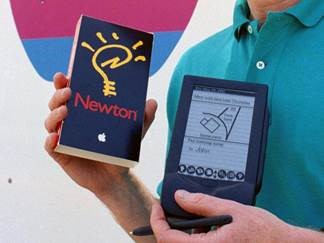 The Newton is held up as an example of Apple’s bad old days — before it became a company with a $1 trillion market cap.  Forbes says the Newton PDA flopped for a number of reasons: it was too expensive (retailing anywhere from $700 to $1,200), it was too big (8 inches tall by 4.5 inches wide), and its handwriting recognition was so bad that a classic “Simpsons” episode made fun of it.

Microsoft Bob was supposed to be a user-friendly interface for Windows; the project was managed by Melinda Gates. Microsoft killed it less than two years after it launched. According to Michael Becraft’s biography of Bill Gates, Bill explained, “Unfortunately, the software demanded more performance than typical computer hardware could deliver at the time, and there wasn’t an adequately large market, and therefore, Bob died.” 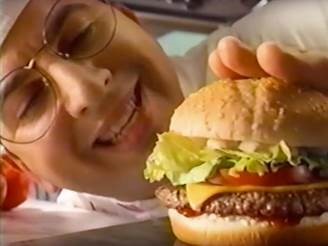 In 1996, McDonald’s introduced the Arch Deluxe, which never caught on.  It was intended to appeal to a more adult, sophisticated palate — outside of its target demographic. To reach this group, McDonald’s spent between $150 and $200 million advertising the Arch Deluxe.  The Arch Deluxe was composed of : fresh beef, a potato bun, peppered bacon, and Arch Sauce (mustard and mayonnaise), as well as lettuce, cheese, tomato, and onion. The Arch Deluxe was ultimately discontinued in the late 1990s. However, McDonald’s tested a similar product called the Archburger in 2018. 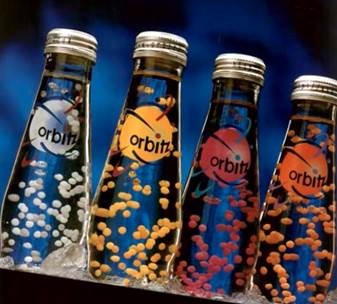 Although the soda, which looks like a lava lamp, appealed to young kids, it was not tasty (people compared it to cough syrup). It disappeared off shelves within a year of its 1997 debut.  Orbitz is still sold on eBay, if you’re interested in sampling its gelatinous globs. 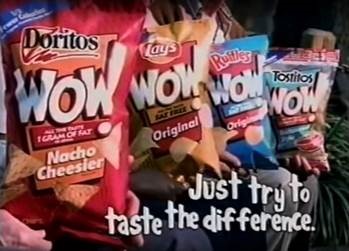 File this under “too good to be true.”  In the late 1990s, Frito-Lay rolled out a miracle food: a line of chips with the upbeat branding of WOW! and a tantalizing marketing claim — a compound called Olestra made the potato chips essentially fat-free.  But, it was not to be.  “While it provided the satisfaction of tasting just like fat, (Olestra’s) molecules were too large to be digested by the body, passing directly through the digestive tract unabsorbed,” wrote Sandy Glass at Fast Company. “Sadly, the result was similar to that of a laxative — stomach cramps and diarrhea prevailed.” 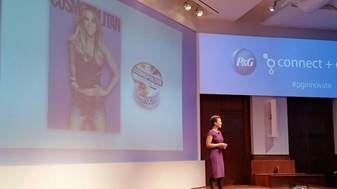 Cosmopolitan magazine made an interesting decision to launch a brand of yogurt in 1999. Needless to say, the yogurt market was already saturated, and Cosmo’s readers were content enough reading the magazine. The yogurt was discontinued after just 18 months, according to the Telegraph. 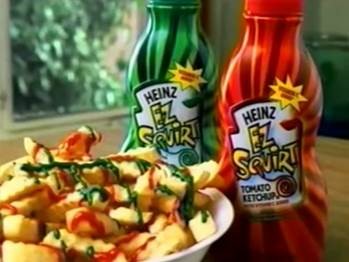 Heinz’s colorful line of ketchup came in hues like purple, green, blue, orange, and red. It actually was sold until 2006. 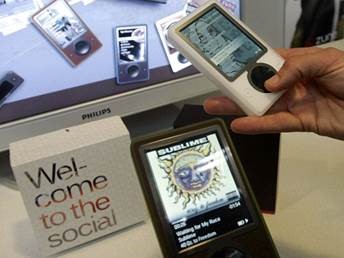 The Zune was built to take on the iPod. It did not.  Robbie Bach, the former leader of Microsoft’s home entertainment and mobile business, gave his explanation as to why:  We just weren’t brave enough, honestly, and we ended up chasing Apple with a product that actually wasn’t a bad product, but it was still a chasing product, and there wasn’t a reason for somebody to say, oh, I have to go out and get that thing. 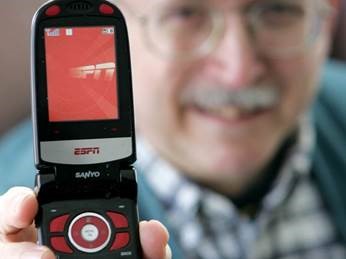 Mobile ESPN, introduced in January 2006, was one of the biggest flame-outs of “mobile virtual network operators,” or MVNOs, in the past decade, which also included Amp’d Mobile, Helio, Disney Mobile, and others.  The idea was that ESPN would exclusively sell a phone that offered ESPN content and video, leasing network access from Verizon Wireless. But ESPN had only one phone at launch, a Sanyo device selling for $400.  No one bought it, and ESPN quickly shut down the service, instead providing content to Verizon’s mobile internet service.

Sponsored mostly by Toshiba, HD DVD was supposed to become the hi-def successor to the DVD when it launched in March 2006. But the Sony-led Blu-ray faction ended up winning the format war when Warner Bros. announced it was dumping HD DVD for Blu-ray on January 4, 2008. About a month later, Toshiba said it would shut down its HD DVD efforts. 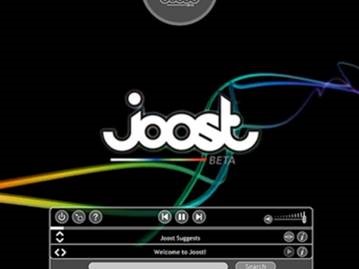 Joost was supposed to reinvent the way we consumed professional video.  Originally known as “The Venice Project,” Joost was mean to be a peer-to-peer TV network for the future, invented by the European geniuses behind Skype. The company recruited rising star Mike Volpi away from Cisco to become its CEO. It got a deal with CBS. Joost’s vision was not realized, as Hulu — a joint venture between News Corp., NBC, and Disney — became the go-to site for TV episodes on the web. Meanwhile, Joost had all sorts of problems with its P2P architecture, its bulky software player, its content library, and more. After launching in September 2007, it never took off, with its scraps being sold in late 2009.

For some reason, Google thought it had to compete with Second Life with a virtual world called “Lively,” which came out in July 2008. (Except that unlike Second Life, Lively was supposed to be sex-free.)  When the economy went down the toilet, those dreams faded fast, and Google quickly pulled the plug on Lively in November 2008. 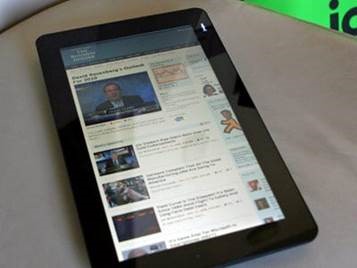 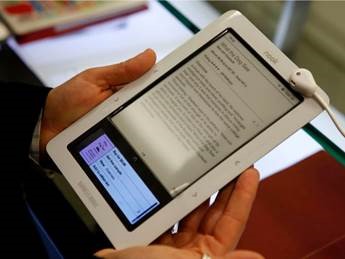 Launched in 2009, Barnes & Noble has now spun off the NOOK into its own company, orphaning the under-achieving e-reader. Sales had been plunging for a while.  Brian Sozzi explained the demise to us: “Shoppers couldn’t get beyond Barnes & Noble being a destination for something they no longer want or generally care about, books,” Sozzi said. “Barnes & Noble management perpetuated that by not investing aggressively enough in marketing to alter perception.” 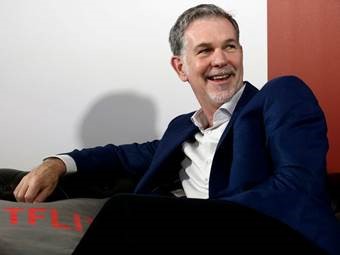 In September 2011, Reed Hastings announced that Netflix would spin off Qwikster as a DVD rental business. This move met tons of criticism, and Hastings backtracked on his statement 23 days later. 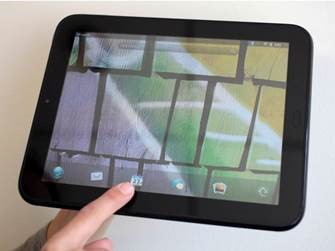 HP gave up the TouchPad and its mobile OS, WebOS, after just a month and a half on the market.  The tablet was no iPad killer, selling just 25,000 units for Best Buy over the 49 days it was on the shelves. 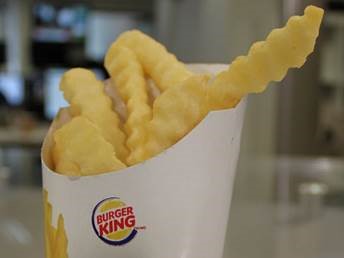 Burger King rolled out its healthier “Satisfries” in 2013 — they absorbed less oil and were only 270 calories (compared to the 340 calories of regular fries), according to Bloomberg. Weak sales led the fast-food chain to pull the plug in 2014. 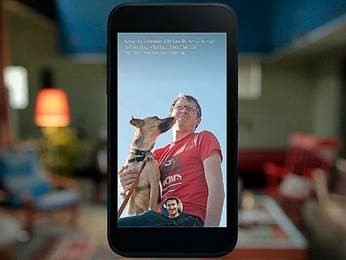 With Home, Facebook tried to become the homescreen for your phone.  It failed. So what happens when you have no control over what appears on your phone’s home screen?  It becomes a mess. In less than a month of being released, the two-year subscription plan dropped from $99 to $0.99. The consensus between reviewers and critics: Home worked only for the most fanatical of users. “It was fine for a Facebook addict,” one reviewer noted. “But [it] seems to run through a lot of data and battery. Uninstalled.”  The flop is reflected by a reorganization in the company.  “Facebook has disbanded the team of engineers originally assigned to work on Facebook Home.